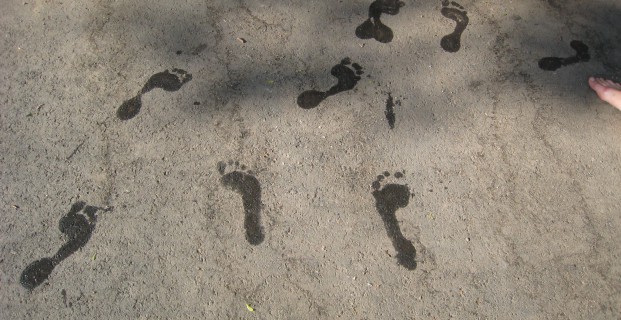 Let’s start with a definition.

Ethnic segregation: people with similar ethnic backgrounds live in the same areas to a greater extent than they would if they were randomly distributed in the country.

A method for measuring ethnic segregation is to compare the number of neighbors with the same ethnic background with what that number would have been if people had been distributed randomly in the country.

In 2008, 60% of native Swedes lived in areas where the majority of the population was also Swedish, and 20% lived in areas that were virtually 100% Swedish.

In contrast, 20% of Sweden’s foreign born lived in areas where more than 40% of the population was also foreign born.

The number of inhabitants of foreign origin in 2008 (foreign-born and native-born with two foreign-born parents) displayed dramatically this kind of marginalization. 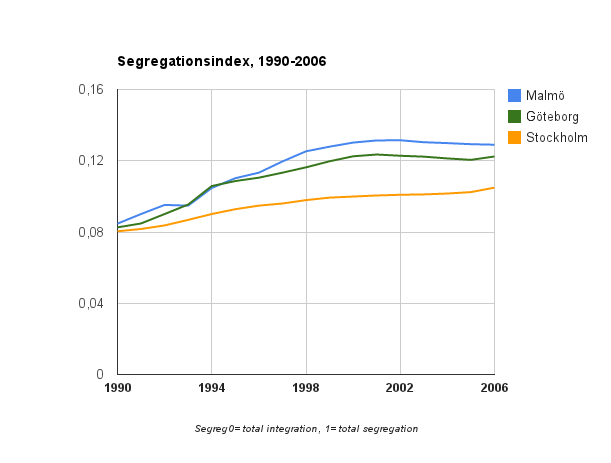 Nowadays in Tensta live almost 20.000 people, but less than half have managed to enter the job market with an average income less than half that Östermalm. 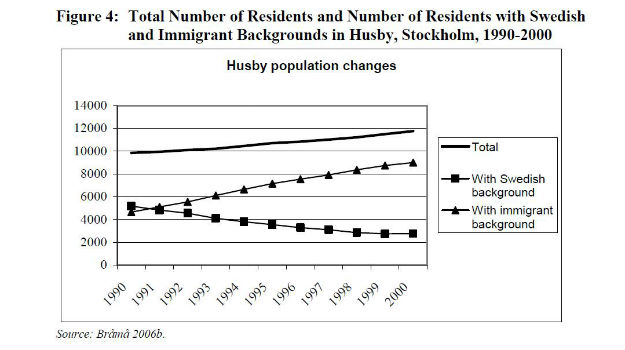 As immigrant populations have grown, Sweden has experienced a persistent level of segregation, among the highest in Western Europe.

The geographical segregation in housing has largely been the unintentional consequence of Sweden’s refugee resettlement efforts and its Million Program (Miljonprogram), an ambitious public housing program implemented by the Social Democrats in 1964 and again in 1974.

The program’s goal was to meet the growing demand for housing in urban areas, where 85% of the country’s population lives, by constructing a million new homes in a decade.

Although these neighborhoods initially were home to large numbers of working-class Swedes, they now have high concentrations of foreign-born populations.

In part, this is due to government housing policies that aimed to place new immigrant arrivals in available housing.

Situated in the suburbs of major cities such as Stockholm, Göteborg, and Malmö, these neighborhoods have become known as betongförorter (concrete suburbs) or immigrant ghettos.

Segregated communities in themselves are not necessarily problematic, and living in an immigrant enclave may offer support to new arrivals who are just acclimating to a new country.

However, multiple generations of immigrants feel they have no choice but to stay in them ethnic enclaves, possibly working against the interests of immigrants and the society that hosts them.

Over time, people living in these socially segregated neighborhoods may risk increased marginalization or stigmatization in the broader society.

“If the goal is for us to live together in mixed residential, research shows that we have failed”, says Roger Andersson, professor of human geography at the Institute for Housing and Urban Research at Uppsala University.

Examining the data of the population living in exclusion zones, it is clearly showed that growing up in this kind of areas can affect both the education and future income negatively, generating in this way the so-called “neighborhood effects”.

Many Swedes are victims of where they live, trapped in their suburbs, without much hope of being able to leave one day.

Ethnic residential segregation is a result of decisions taken by the Swedish majority, who tend to cluster in Swedish dense neighborhoods and avoid immigrant-dense housing estates.

The matter of social justice and equality has been revitalized by the exclusion of the immigrant population from many spheres of society.

It seems to sound like a paradox that, since the country declared itself multicultural in 1975, integration into the labour market has become much more problematic, immigrants’ political participation has dropped, and increasing proportions of especially newly arrived immigrants have concentrated in ‘immigrant-dense’ neighborhoods.

Many fear that social exclusion will lead to crime and that social conflicts will become more common in a future not so far from today, increasing the risk of racism and discrimination.

The multicultural model seems more out of reach now than it was at the time of its breakthrough 30 years ago.

My name is Gianluca Romano Palumbo, from Rome-Italy. This blog is written from my perspective as an immigrant in Sweden and aims at explaining the actual situation and the problems connected to the process of integration in Sweden.I have a Bachelor degree in Political Science and International Relations. My thesis was on the history of Swedish Parliament (Riksdagen) through the centuries. This subject impressed me for its democratic and pluralistic features so much as to make me move to Stockholm. My Master degree is in Science for Cooperation and International Development. Gianluca Romano Palumbo (political researcher @ Dance for Love) E-mail: rogianlucamano (at) hotmail (dot) it (for any question)